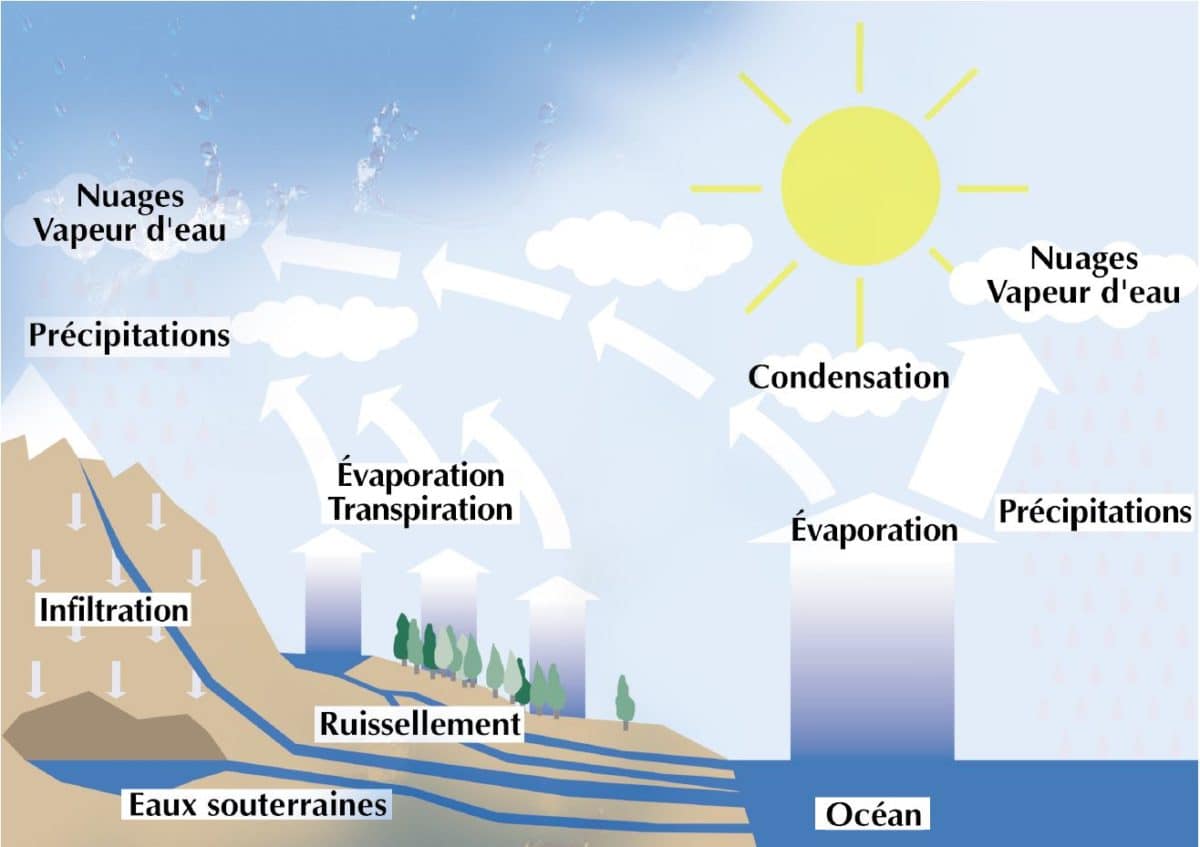 On our planet, water is everywhere in various forms. The Earth is 70% water, which has earned it the pretty name of “Blue Planet”. Its waters are distributed over 97% salt water and less than 3% more or less accessible fresh water. Water operates in a closed circuit that has remained the same for billions of years. The water from the seas evaporates into the atmosphere under the heat of the sun. It then forms clouds which will move under the force of the winds. Aided by the effect of gravity, the droplets that make up the clouds become heavier and fall to the ground in the form of precipitation (rain, hail, snow). This rainwater will make it possible to supply the underground water tables which will recharge the waterways, which will in turn flow into the sea and thus, from the sea to the sky, from the sky to the earth and from the earth to the sea. sea, the journey of water begins again and again.

Water circulates on earth in different forms: clouds, rain, rivers and oceans. It will pass from the sea to the atmosphere, from the atmosphere to the land and then from the land to the sea, following a cycle that repeats itself indefinitely. Within a single basin, all aquatic environments (lakes, rivers, sea, groundwater, etc.) are interdependent during this cycle. The water cycle breaks down into several stages :

Thanks to solar energy, water from seas and oceans evaporates into the atmosphere, getting rid of its salt and impurities. Evaporation can also come from the earth, so we’ll talk about evapotranspiration. It is a phenomenon that transforms the waters of rivers, lakes, soils, animals, people and especially vegetation into water vapor. This water vapor will then collect in the clouds, in the same way as the evaporation of seas and oceans.

Upon contact with the atmosphere, water vapor cools and turns into droplets that will form clouds, haze or fog.

Driven by the winds, clouds move through the atmosphere. During climate change and under the effect of gravity, clouds become heavier and fall to the ground in the form of rainwater, hail or snow. 79% of precipitation falls on the oceans, the remaining 21% falls on the earth and then comes to feed the water tables, either by infiltration or by runoff. Rainwater that seeps into the ground can stagnate for thousands of years before returning to the oceans. A little less than half of the precipitation will be used to recharge the groundwater, the rest will go back to evaporation. The water that fails to infiltrate directly into the soil trickles down the slopes and then flows into lakes and rivers. This water will follow their course to reach seas and oceans. All water from runoff (streams, rivers, streams, lakes) is called drainage stream.

During its cycle, the water will pass through various natural reservoirs to stay there for a short time before resuming its journey to the seas and oceans. This time of stagnation is called the residence time of water. It varies according to the types of tanks :